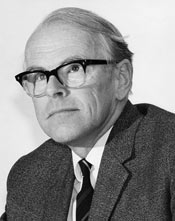 Denis Parsons Burkitt was born in Enniskillen, and graduated from TCD as a physician and became a world renowned pioneer in public medicine. He worked in public service for many years in Uganda.

Burkitt first described a cancer called Burkitt’s Lymphoma and showed that its geographical incidence correlated with the same temperature and rainfall zones of malaria. Burkitt’s Lymphoma is linked to the presence of a virus in people whose immune system is weakened by chronic malaria. Burkitt also noted that in native Ugandan hospitals patients rarely displayed colon cancer or heart disease, which he linked to the fibre-rich nature of the African diet.

Denis Burkitt returned to London in 1966 and led a campaign advocating the importance of fibre in the diet.