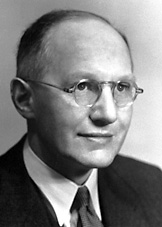 Born in Dungarvan, Co. Waterford, Ernest Walton entered Trinity College Dublin in 1922, where he had a distinguished career. He then obtained a place at the Cavendish Laboratory in Cambridge, working under the direction of Ernest Rutherford (1871 – 1937). There he collaborated with John Cockcroft (1897 – 1967) in the building of a machine which could accelerate protons to energies of 700,000 electron volts. With this apparatus, he and Cockcroft “split the atom” in 1932. They received the Nobel Prize for Physics in 1951.

What they did was bombard a lithium target with their accelerated protons, and observed scintillations characteristic of alpha particles (helium nuclei). The lithium atom had been split into two, with the release of excess energy from the conversion of some of the mass, in accordance with Einstein’s well-known equation, E=mc² (Energy = mass times the speed of light squared). This was the beginning of accelerator-based experimental nuclear physics, which has taught us so much about the nature of matter.

Walton returned to Trinity College in 1934 where he modestly devoted the rest of his career to teaching the subject that he loved.