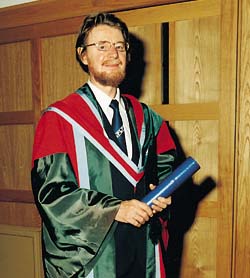 John Bell was born in Belfast and became one of the leading theoretical physicists of the twentieth century.

John Bell worked in The European Centre for Nuclear Research (CERN) Geneva for 30 years. He developed the set of equations called Bell’s Inequalities and devised a test to show that 2 particles, once connected, are always afterwards interconnected even if they become widely separated, e.g. when an atom ejects two photons in opposite directions, the measurement of the spin of one photon immediately fixes the spin of the other.

In the early 1980’s a French team tested Bell’s Criteria and detected a connection between widely separated particles.