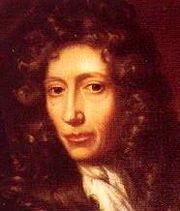 rt Boyle was born in Lismore, Co. Waterford, and is called ‘The Father of Chemistry’.
Robert Boyle was the first prominent scientist to carry out controlled experiments and to publish detailed accounts. Boyle developed an improved vacuum pump and used it to show that, for example, air in necessary to transmit sound, a feather falls faster in a vacuum than in air, candles are extinguished and animals cannot live without air.
Robert Boyle studied the behaviour of gases – Boyle’s Law regulates gas volume to pressure.

Robert Boyle began the process of separating chemistry from alchemy, its ancient pseudo-scientific precursor, and was the first to clearly define the nature of an element. Boyle founded the Royal Society and published his most famous book ‘The Sceptical Chymist’ in 1661.