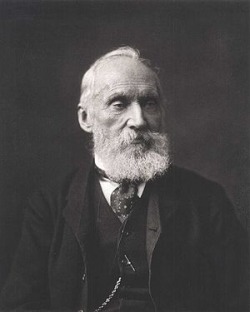 illiam Thomson was a colossal figure in 19th century science and was one of a handful of scientists who shaped the physics handed on to the 20th century. Apart from his scientific work he was also a successful business man. When he died in 1907 he had published over 600 scientific papers and owned 70 patents.

William Thomson was born in Belfast in 1824 where his father James taught mathematics. In 1832 the family moved to Glasgow when James was appointed Professor of Mathematics at Glasgow University. William was destined for high scientific achievement from his earliest days. Educated by his father, William entered Glasgow University at the age of 10. He moved on to Cambridge University where he graduated with high honours in 1845 at the age of 21. William was a champion Cambridge oarsman and a founder of the music society. Following successful lobbying by his father, he was appointed Professor of Natural Philosophy (now called physics) at Glasgow University at the age of 22, a position he held until he retired 53 years later in 1899.

To his lectures to students more interesting, Thomson introduced the concept of the lecture-demonstration. For example, he would illustrate the law of conservation of momentum by firing a bullet into a wooden pendulum using an old muzzle-loader rifle.

Thomson’s scientific work was vast and deep. He played a major role in developing the second law of thermodynamics, one of the most fundamental laws in physics.

He introduced a new scale of absolute temperature measured in units called kelvins, each of the same size as the degree celcius. Absolute zero on the kelvin scale equals minus 273 degrees celcius and is the temperature at which atoms cease to move about. Thomson did extensive mathematical analysis of electricity and magnetism including the basic ideas for treating light as an electromagnetic phenomenon. He also made geophysical determinations of the age of the earth.

When James Clerk Maxwell (1831-1879) later studied electricity and magnetism, he first read all of Thomson’s papers on the subject. In the most significant scientific achievement of the 19th century Maxwell developed the electromagnetic theory of light. Maxwell readily acknowledged Thomson’s contribution.

Thomson viewed all physical change as energy related phenomena. He was a great unifier of theories and he brought together disparate areas in physics such as heat, thermodynamics, mechanics, magnetism, electricity and hydrodynamics. This synthesis allowed 20th century physics to make the next great leap forward.

Thomson was convinced that all forms of energy were interrelated – heat, light, electrical, magnetic, mechanical – and he believed that the various theories dealing with matter and energy were converging towards a grand unified theory. James Prescott Joule (1818-1889) established the conversion relationship that applies when mechanical motion is converted into heat. This spurred Thomson to great effort culminating in a major mathematical volume ‘On the dynamical theory of Heat’ in which he outlined his version of the second law of thermodynamics.

Thermodynamics is the study of energy flow and transformation. Thomson saw that the conversion of one form of energy into another is never perfectly efficient; some energy is always lost as heat and is unavailable to do useful work. Consequently every finite system, including the universe, is constantly running down and will eventually stop. This basically is the second law of thermodynamics.

Arising out of his work on heat, Thomson calculated the age of the earth. He assumed that the earth was originally as hot as the sun and has been cooling ever since. He calculated that it would take between 20 and 400 million years for the earth to cool to its present temperature.

If Thomson was right several major theories were unworkable. The geologists believed in uniformitarianism, i.e. that the weathering forces currently at work can, by and large, explain the tortured physical features of the earth. But this theory requires these forces to have acted over a period of billions, not millions, of years. Also, the theory of evolution required a much longer period in which to act than Thomson’s estimate would allow. Because of this discrepancy, Thomson never accepted evolutionary theory.

In time it became clear that Thomson’s estimate of the earth’s age was wrong. There is more heat in the earth than Thomson knew about. Much of it is generated by radioactivity, which wasn’t discovered until 1895. Modern calculations put the age of the earth at around 4.6 billion years.

The first transatlantic telegraph cable was laid in 1858, but it failed largely because of poor insulation and the large voltages used. Thomson invented a sensitive mirror galvonometer capable of detecting feeble signals which was an essential element in the first successful cable laid in 1866, running from Valentia Island, off Co. Kerry, to Newfoundland, Canada. Thomson sailed on-board the cable-laying ship, the Great Eastern, risking his life on several occasions. He was knighted by Queen Victoria in 1866 for his work, and he was raised to the peerage in 1892 as Baron Kelvin of Largs.

Thomson accumulated great wealth through his patents and business interests – he became a partner in 2 engineering consulting firms and in an instrument-making company. He enjoyed a wealthy lifestyle that included a 126-ton yacht and a baronial estate. Spurred by his nautical pastime he improved compasses for navigation and his new design was adopted by the British Navy.

Lord Kelvin died in 1907 and is buried in Westminster Abbey. A commemorative statue in Botanic Gardens, Belfast is appropriately inscribed – ‘He elucidated the laws of nature for the service of man’.