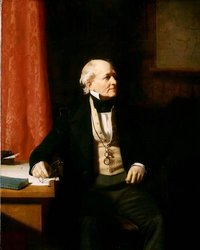 Francis Beaufort was born in Navan, Co Meath and became Chief Mapmaker and Hydrographer in the British Navy. He devised the Beauford Scale in 1806, classifying the velocity and force of winds at sea. The scale ranged from calm (0) up to storm (13) and correlated wind strength with the amount of sale a full rigged ship would carry appropriate to the wind conditions. When steam took over, the scale was modified to refer to states of the sea and later to its present form – an international scale of wind velocities.

In 1831, Francis Beaufort commissioned the celebrated voyage of the Beagle on which Charles Darwin sailed and gathered much of the data on which the theory of evolution is based.