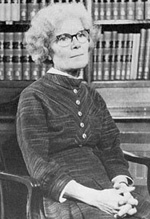 Kathleen Lonsdale (nee Yardley) was born on the 28th January 1903 in Newbridge, Co.Kildare.

Kathleen Lonsdale played a fundamental role in establishing the science of crystallography and found the planar hexagonal structure of benzene. She also made important investigations into natural and synthetic diamonds and the mechanism of diamond synthesis. In 1966 a rare form of hexagonal diamond was named Lonsdaleite in her honour.

Kathleen Lonsdale was one of the women pioneers in a man's world, the world of professional scientists. She opened the way for other women and crystallography became an area of the physical sciences where women became prominent.